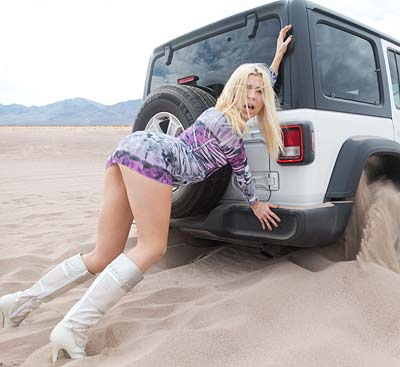 A sexy secretary begs her boss to drive the company car when checking out the new construction project site with him together. Accidentally she gets the Jeep stuck and for this her boss wants to fire her. Let’s see if Sophia has a chance to keep her job?

Sophia is so excited. Finally her boss gives her the chance to join him on a drive to check out his newest building project: The biggest Wellness Hotel Oasis in the middle of the most beautiful looking desert landscape.
She has been always impressed by those visionary ideas of this powerful business man. This trip now offers her the chance to show him what an outstanding and hardworking secretary she is.

For Sophia it is such a fun adventure when her boss drives the Jeep through the sandy desert. How cool must it be to drive a car in the dunes? Her friends would be so impressed if she could tell them that her boss let her drive a Jeep in the dunes

So she gathers all her courage and asks him politely “Sir, I have a request. You know, I just got my driver’s license and I’ve never driven off-road before. And I’ve never been allowed to drive the company car…. So I am wondering if maybe I can drive in these sand dunes?”
“Sophia, I understand that this might look tempting to you, but it’s not easy to drive the car in the sand. Especially for a beginner like you.” he says. “Yes I know, but how am I supposed to learn? You can teach me !!!” Sophia says.
Her boss does not like her idea so much: “Sophia I am not sure if I really want to teach you here. When something goes wrong we would really have a problem in the middle of nowhere. Probably so far out here we do not even have cell phone service.”
But Sophia is determined to make this happen “Oh please! I will not get this thing stuck. I promise !!!” … “Ok I let you drive, but be very careful. Seriously, don’t do anything stupid and do not get stuck.”

At this point Sophia is super excited. This is the chance to show her boss what a good driver she is. “Here we go” she says and the car starts moving “See, I am doing such a good job already” she proudly says, to calm down her nervous looking boss. “Yeah, OK. You’re doing great” he admits which boosts Sophia’s confidence a lot. She is so happy and enjoys this great experience a lot.

Suddenly when Sophia drives up a small hill, the car starts to rattle a bit…. the further she drives, the more the wheels starts spinning in the soft sand and the forward movement stops. At that point Sophia gets a bit nervous. To solve that embarrassing moment quickly she decides to put the car in reverse to drive back down the hill. “Oh, that does not help” she says with a worried voice. So now she switches to forward gear again, but all that happens is the engine revving up without moving the car.
“Oh no! Sophia, what did you do?” her boss asks. “Ahhhm, I think we might be stuck a little” she replies. “But I told you don’t get stuck here !!! Oh no. Ok, wait. I will have a look from the outside to see what’s really going on”…. “Sophia, get us out here! You promised me to not get stuck!”

But the harder she tries, the more the Jeeps starts to get buried in the sand. Oh this can’t be good. “Sophia, stop !!! Get out of the car and have a look how deep the sand is”. In absolute shock she says “OMG, the Jeep is sinking down in the sand” “Yeah I see that, but what did you tell me not to do?” her boss asks….. “Not to get stuck” replies the highly embarrassed girl …. “And what did you do?” …. “I got stuck” with a voice full of shame she says. “I am sooo sorry that I got your Jeep stuck” Sophia apologizes, to her boss who is clearly not amused about this situation at all.

Sophia knows she has to try her very best to get the car out of this terrible situation. Otherwise she will be in big trouble. With the car door wide open, to have a better look of the situation, she starts pressing the gas pedal with her sexy high heel boots. The wheels starts spinning and sand is flying high into the air… but the car is still stuck. She steps out of the Jeep again and walks around it to check on the other side of the car. “Sophia what the hell did you do?” her boss shouts at her. “I know

Poor Sophia. What can she do to get the car out again? So she starts digging with her hands to remove the sand in front of the tires while her boss stands there and watches his secretary crawling around in the sand. “Sophia, this is just stupid what you are doing here. This will never work”. At this point she bends more forward and this gives her boss a nice view to look under her short skirt

“What did you say?” Sophia asks. “Ahhh, nothing. You’re doing great! I have the feeling this might work to get us out here.” he says while enjoying the upskirt view of his young secretary which to his surprise does not even wear underwear. Now he somehow starts to enjoy feeling the power that he could make his sexy employee crawling in the dirt in front of him, desperately listening to his command.

“I’m so sorry. I am going to try to drive it out one more time”. “Yes, you really should feel sorry for this” her boss replies. Sophia tries even harder to get the car out. “Let me see what you are doing on the pedals… You’re doing it wrong. You have to push the pedal a little bit harder” he says while watching her pumping the pedal. Sophia follows all his directions in the hope to get the stuck car out again.

“I don’t want to try to push. So you get out of the car and let me drive” her boss commands. Moaning full of exhaustion Sophia tries to push as hard as possible. “Try harder” her boss yells at her. “I’m trying” she desperately says while pushing with all her strength… but it doesn’t work. The car is still stuck, so Sophia wants to try again to drive it out by herself.

“You really got us into big trouble. You got us completely stuck. Sophia, try to call the office for help !!!” Sadly she has to find out that there is really no cell phone coverage in this remote location. So now she really tries super hard to free the Jeep from the sand and floors the gas pedal hard. But this all doesn’t work. The situation is hopeless. She got it stuck so badly.

“That’s not good. Why did I even hire you? I’m so stupid, people even warned me about you. They said you are nothing but trouble. And guess what? They were right. Look at this !!! It’s all your fault. I should really fire you !!!”
“Please don’t fire me. I really need this job”
Sophia loves her job and has lot of respect for her boss. She knows that he fires employees for smaller mistakes than getting the company car stuck and him stranded in the middle of the desert. She feels so helpless at this point. Sophia starts begging him not to fire her. But a stone cold business man like him won’t listen to her reasons why he should not fire her, after she got him stranded in the middle of nowhere. His time is way too valuable to waste it like this.

“Please don’t fire me. You know that I literally will work on my hands and knees to fix any problems that come up.” “But Sophia, how can you make up for this!” he replies while shaking his head in disbelieve that he even hired that girl. “I don’t know. I only can try to dig us out of this”…. “But that won’t work” her angry boss yells at her. Sophia starts the engine and tries one last time. But the car is stuck so bad that there is no chance to ever get it out again. She got it totally stuck.

“Get us out here! You really know that your job is on the line!… Seriously, I will fire you for this!” Sophia is so worried to lose her job at this point: “Please, think of a way that you can’t fire me. Think of something I can do to make up for this…. You know, I would do anything to keep my job” “Anything?” he asks with a devilish smile in his face. “Yes, anything”. “You would do really anything?” “Yes sir!” Sophia replies.
“Hmmm, OK. I might have an idea. Maybe there is something I wanted from you all the time….” he says. “Something which will make you feel better? But I don’t know what I have to offer to a man like you”. His eyes are checking out Sophia’s amazing body: “Well, look at you. You are very cute and sexy and I think you noticed how I sometimes look at you in the office when you wear your short outfits. So maybe, when you are really, really nice to me I can forget about what happened here.” he says.

Does Sophia understands this right? She never expected he would go that far, but on the other side she understands that this is her only chance to keep her job.

Background story about the video: This was very experimental for us which originally wasn’t planned at all. While we were all together at dinner the night before the shooting, we talked about our ideas. I also wanted to hear Sophia’s suggestions and what she thinks about it. She liked my original idea to play her mean powerful (voyeur like) boss. But to make it more spicy she would enjoy to take this even a bit further with me if my wife approves this.
Oh yes guys, sometimes my life so awesome !!!

Regarding the outtakes: Who would have thought how much attention a hot girl in a super short dress and her stuck Jeep would cause in the middle of the desert? Where did suddenly all those people come from? I guess we were the talk of the town, because at the end of the video every couple of minutes more and more people showed up. lol. They were just right behind a little dune, we could even hear them. But besides that we all had a super fun shooting day.
Hope you enjoy the video as much as Sophia and I enjoyed shooting it